Learning in the fast lane 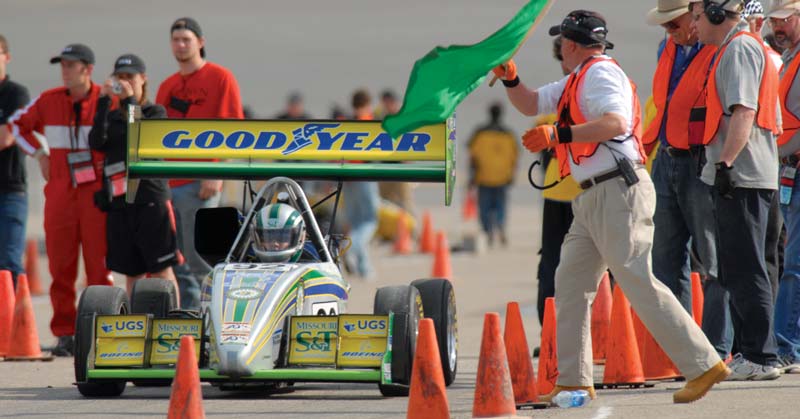 One of the most successful student design teams at Missouri S&T in 2008 was the Formula Car Team. This team, which designs and manufactures a miniature Indy-style racing car each year, finished second out of 40 teams at Virginia International Speedway (April 23-26), eighth out of more than 100 teams at Michigan International Speedway (May 15-17), and second out of 80 teams at Auto Club Speedway in Fontana, Calif. ( June 25-28).

The formula car competitions are sponsored by the Society of Automotive Engineers. Missouri S&T’s 2008 car weighs 450 pounds and has a top speed of about 85 mph. Some 40 S&T students were involved in every stage of creating the racing machine, from computer modeling to welding the car’s steel frame. Many of those students traveled to the Formula SAE competitions as drivers and crew members.

Missouri S&T’s Steel Bridge Team also enjoyed success in the past year. The team, which designs and assembles a scale-model bridge, placed third in a regional competition last spring in Fayetteville, Ark. That was good enough for a spot in the national competition in Florida, where the team placed 34th in the country.

The Human-Powered Vehicle Team continued a tradition of outstanding performances by finishing second overall in both the East Coast and West Coast competitions in 2008.

Other student design teams that represented S&T well in 2008 include the Advanced Aero Vehicle Team, Baja Team, Concrete Canoe Team and Robotics Team. The Solar House Team is currently designing a new house that will be built in 2009. For more information on all of S&T’s design teams, visit design.mst.edu.