Although former Vice President Al Gore got most of the credit in the media for the 2007 Nobel Peace Prize, the award was shared by the Intergovernmental Panel on Climate Change (IPCC). A team of Missouri S&T researchers were integral to the IPCC’s work and in April 2008 the group received official recognition of their “substantial contributions” to the award by the IPCC.

The award was presented for “efforts to build up and disseminate greater knowledge about man-made climate change, and to lay the foundations for the measures that are needed to counteract such change.” The IPCC was recognized for its research connecting human activities and global warming. Missouri S&T researchers from the Center of Excellence for Aerospace Particulate Research contributed their work with studies and analysis related to aircraft emissions in the atmosphere. 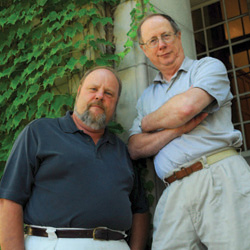 The Missouri S&T team is led by Donald Hagen, professor of physics, and Phil Whitefield, professor and chair of chemistry. Their research into the role of aircraft emissions on climate change was featured in chapter seven of the IPCC report “Aviation and the Global Atmosphere,” one of the scientific reports from the IPCC that contributed to the Nobel Prize. Hagen and Whitefield were two of the chapter’s lead authors. The report summarized the knowledge of the role of aircraft emissions on climate change and made predictions based on that information.

In the mid-1990s, Hagen and Whitefield were invited to join the IPCC and contribute their research to the panel. For more than a decade, the pair has been studying particulate emissions produced by aerospace activities, such as aircraft operations and rocket launches.Their world-class research program has led to the development of an internationally accepted approach to characterize the nature of particulate matter, or soot, in jet engine and rocket exhaust. Their research is sponsored by government agencies, engine manufacturers and major airlines and has generated an average of $2 million in research income for the university annually.

Soot is the most complex of the emittants of a jet engine and the least understood, Hagen says, despite all the research that has been done in recent years. “Much is still unknown about its environmental and health impacts,” Whitefield adds, “but our research is serving to improve this situation.”

In relation to climate change, they’re examining what airplanes are doing that affects the natural balance the earth uses to deal with the sun’s radiation, Whitefield explains. “That is the energy driving the whole global climate change issue. We’re dumping all these greenhouse gases and particle surfaces into the atmosphere and they’re upsetting that natural balance.”

“And that’s becoming increasingly interesting to the population as a whole,” Hagen adds.

Hagen and Whitefield credit their colleagues at Missouri S&T for much of their recognition.

One reason we were able to do so much work in this area is because we are at a university that is a mix of science and engineering,” Hagen says. “We were able to represent the university on the IPCC, but we drew on phenomenal support from our colleagues who work with us in this interdisciplinary center. Missouri S&T is a unique entity to foster that kind of work.”

In addition to Hagen and Whitefield, Darryl Alofs, professor of mechanical and aerospace engineering, Nuran Ercal, professor of biochemistry, and Gary Gadbury, assistant professor of mathematics and statistics, also work on the project, as well as graduate and undergraduate student researchers.

“One invaluable facet of the research program is its fascination to a broad range of both undergraduate and graduate students,” Whitefield says. Each year the program supports as many as 20 students from diverse disciplines like chemistry, biochemistry, physics, mathematics and statistics, as well as mechanical, aerospace, electrical, chemical and environmental engineering. These students work on instrument design and development, and gathering, analyzing and interpreting data.

Their work provides unequaled experience to be applied in their future careers,” Whitefield says.