The old statue of St. Patrick that used to be in the library is gone. It has been shipped to New York, where it will be used as a mold for the creation of a new, bronzed statue.

When the bronzed statue of St. Patrick is finished, it will travel back to Rolla, where it will be placed on a new foundation. The plan is to put the new St. Patrick outside near The Puck. 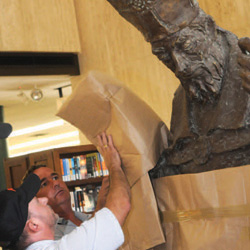 Movers wrap the statue for transporting. Photo by B.A. Rupert

The old statue looked bronze, but it was made out of plaster. In August, it was sent to the Modern Art Foundry in Astoria, N.Y. The student-led St. Pat’s Committee is paying for the bronzing with a $60,000 donation. (The St. Pat’s Board of 1970-1971 paid for the original statue.)

“Our next goal is to raise another $150,000 this year for the St. Pat’s Plaza near The Puck,” says Lance Haynes, St. Pat’s advisor and professor of speech and media studies at Missouri S&T. “We have to raise the money for the landscaping, the base and construction. It’s really going to be beautiful when it’s done.”

Friends and alumni have formed a St. Pat’s Fund within the Miner Alumni Association. Donations are tax-deductible. Donors who give $5,000 or more will be listed on a plaque on the base of the statue.

“This has been a dream of many since the original statue was given to campus by the St. Pat’s Board in the fall of 1970,” says board alum Eric Dunning, EMgt’71, MS EMgt’72. Sculptor Rudy Torrini created the 1970 statue and is producing the bronze.