As a guard and tackle on the Miner football team, Bob Keiser, EE’65, learned firsthand the importance of teamwork. The leadership lessons he gained from athletics stayed with him throughout his career, taking him all the way from the football field to the boardroom.

“An athlete must lead by example and make decisions from a leadership standpoint,” Keiser says. 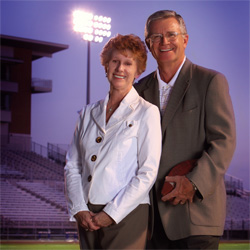 When he retired in 1999 as chair and CEO of Oryx Energy, Keiser wanted to make sure future generations of Missouri S&T Miners learned the same lessons, so he and his wife, Mary, established the Robert L. Keiser Athletic Scholarship with a gift of $100,000. The scholarship provides funding for athletes in good academic standing who attend Missouri S&T. Since its establishment in 2000, the scholarship has been awarded to a student in nearly every sport. With added gifts from the Keisers, the endowment has grown to more than $400,000, making it the largest athletic scholarship at Missouri S&T.

“Athletics are important to a university and to college students,” Keiser says. “Sports teach leadership and teamwork skills you can’t get in a classroom. Athletics are a great addendum to a great education.”

Keiser began his career with Sun Oil Co. as an engineer. The company later became Oryx Energy and merged with Kerr McGee in 1999. He progressed through various positions, working all over the United States and in London, England. During his career, the Keisers moved 17 times.

The Keisers have two sons, a daughter and four grandchildren, all of whom live nearby. “We’re very lucky,” Mary says. “It’s wonderful to have them close.”

In their spare time, the Keisers enjoy golf and travel. Both are sports fans. Of course living in Frisco, Texas, makes them fans of the Dallas Cowboys. Keiser has been a fan of the team since its start in 1960.

“The education and experience that I received from my tenure at Missouri S&T were keys to my career,” Keiser says. “Varsity football was an important part of my college life.” It’s the lessons learned on the football field – as well as those in the Missouri S&T classroom – that he credits with much of his success.