Plans to extensively renovate the Student Recreation Center at Missouri S&T have been bolstered by a $1 million gift from the Anheuser-Busch Foundation, a $250,000 gift from Roger Dorf, ME’65, and his wife, Sandy, and student fees. 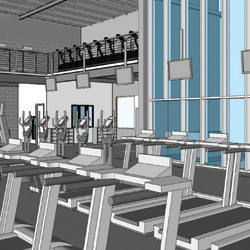 A view of the planned renovation of the fitness facilities in the Student Recreation Center. Image by Bozoian Group Architects

The Anheuser-Busch Foundation, the philanthropic arm of the St. Louis-based brewer, has pledged $1 million in matching funds to support the renovation and upgrade of the 35,000-square-foot facility. The Dorfs pledged another $250,000 in matching money. The Missouri S&T Student Council members unanimously voted to meet the match by devoting an approved student fee for facilities to the project. The student commitment will allow the university to finance an additional $1.25 million and start phase I of the effort this fall. With renovation costs totaling $6 million, an additional $3.5 million is needed to complete the project.

“For years students have consistently stated that our recreation facilities are not satisfactory,” says Beth Groenke, former Student Council president. “The fact that the students unanimously voted to dedicate this funding shows how united we are and how much we appreciate this opportunity.”

Jeff Steinhart, EMgt’79, vice president of engineering for Anheuser-Busch and president of the Missouri S&T Board of Trustees, says modernized athletic facilities would give the university a boost with prospective students who enjoy sports and fitness.

“At Anheuser-Busch, we are committed to the health and safety of our employees and have a number of programs in place to encourage wellness,” says Steinhart. “We offer best-in-class fitness centers, health screenings and other programs to support weight loss and smoking cessation.” Steinhart says he’s impressed that the students stepped forward to match the gift. “It tells me that wellness is definitely an area that means a lot to them,” says Steinhart. “Fitness facilities play an important role in attracting top students.” 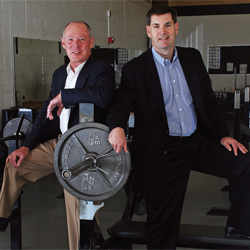 More than 2,300 Missouri S&T students participate in intramural athletics, and 340 student athletes compete in the intercollegiate athletics program. The complete $6 million project will add a new fitness complex and HVAC throughout and improve several areas of the facility, including the indoor walking track; courts for basketball, racquetball, squash, tennis and volleyball; and a weight room for intercollegiate athletes.

“The project will tremendously boost recreational activities and intercollegiate athletics on campus,” says Mark Mullin, director of athletics at Missouri S&T. “I know I speak on behalf of our coaches, student-athletes, and the numerous participants in intramurals, recreation, and fitness when I say a heart-felt thank you to the Anheuser-Busch Foundation, Roger and Sandy Dorf, and the students of Missouri S&T for their tremendous generosity. I cannot think of any project that will make such a positive impact on so many who are a part of this outstanding institution.”

Dorf, vice president and general manager of Cisco’s Broadband Wireless Unit, and his wife, Sandy, recognize recreation is part of a well-rounded education. Their $250,000 gift brings the total raised to $2.5 million. Dorf was an active high school athlete but didn’t have the opportunity to compete during college. “It’s not as easy to raise funds for recreation facilities compared to scholarships,” says Dorf, vice president of the Missouri S&T Board of Trustees. “But it’s an important recruiting tool for college life in the 21st century.”

“We already have great academics and great residence halls. We want our recreational facilities to be on the same par,” says Missouri S&T Chancellor John F. Carney III. “These generous gifts from the Anheuser-Busch Foundation and Roger and Sandy Dorf lay the foundation for the complete renovation of our Student Recreation Center.”