While most Missouri S&T students were returning to classes after winter break, sophomore Jacob Brakeman was learning how to fall.

Brakeman, a civil engineering major from St. Charles, Mo., was one of 12 Army cadets selected from a class of about 25,000 students nationwide to train alongside Army soldiers during a three-week Army Basic Airborne Course at Fort Benning, Ga., in January. 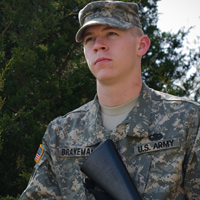 During the first week, Ground Week, cadets and soldiers learned individual airborne skills to prepare for a parachute jump and safe landing.
Week two, Tower Week, focused on refining individual skills. Participants learned the procedures for a “mass exit” from an aircraft and trained on the 34-foot tower, the swing landing trainer and suspended harness.

Soldiers and cadets finally tested their skills during the third week, Jump Week, by making a real jump from an aircraft. Brakeman and his fellow cadets completed five jumps the week prior to the end of the course to earn the title of paratrooper.

“This experience left me with the most confidence I have ever had,” Brakeman says. “I felt like I could do just about anything, which was good, because I needed that kind of attitude to try and catch up on the class work I missed. All in all, it was one of the best experiences of my life, and I look forward to the next time I get to exit one of those ‘big iron birds.’”