When Lawrence George was growing up in New Orleans, he was curious about the fraternity antics of young college students in his community. “I used to see them on Canal Street sitting on blocks of ice,” George says. “And when I became a pledge, things that are now considered ‘hazing’ were accepted.” 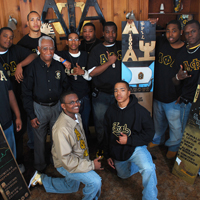 In 1956, George joined the Beta Phi chapter of the Alpha Phi Alpha fraternity at Dillard University in New Orleans. This is the same fraternity that helped produce Martin Luther King Jr., whom George met in the fall of 1956 and again in February of 1957. After college, George made his way to Rolla via St. Louis. In 1965, he became the advisor to a group of young men who were starting a new Alpha Phi Alpha chapter at what was then the University of Missouri-Rolla.

George is now retired from his post as Missouri S&T’s assistant to the chancellor for affirmative action, but he’s still the advisor to the Alphas on campus. He says hazing is no longer tolerated. But something altogether different, “stepping,” something that George never experienced as a student, is now a big part of the landscape at historically black fraternities like Alpha Phi Alpha.

“If stepping would have been part of my initiation, I wouldn’t have made it,” George says. “Father (Joe) Carlo at Christ Episcopal in Rolla once told me I was the only black guy he knew who couldn’t dance.”

Stepping, for the uninitiated, is like tap dancing without tap shoes. It probably started before the civil rights movement with pledges who were forced to march in lockstep to encourage unity, but stepping didn’t gain a
significant foothold on college campuses until the 1960s or 1970s. Modern step shows include stomping, satirical “put-downs,” improvised dance moves and gestures of respect.

Keenan Miller, CE’06, is a project engineer for Brinkmann Constructors in St. Louis, but he’s still involved in fraternity activities. Miller says one of the highlights for an Alpha at Missouri S&T is visiting the Annie Malone Children’s Home in St. Louis, a trip that usually involves stepping.

“We make the children presents, talk to them about education, and most of the time just listen to them,” Miller says. “Afterwards, we step for them.”
Miller, who also played football at Missouri S&T, says fraternity members and alumni spend long hours practicing for stepping contests, which help Alphas and other members of historically black fraternities raise money for charities and campus events.

Step shows are part of the culture of historically black fraternities and sororities across the nation. Each of these Greek organizations, of course, has its own traditions, practices, signs and symbols, as well. In the case of the Kappa Alpha Psi fraternity, the other historically black organization on campus, canes are very symbolic and are incorporated into step shows.

Unique to the Epsilon Psi chapter of Alpha Phi Alpha at Missouri S&T are “ship paddles.” Miller explains: “Every ‘ship’ or pledge class that joins our chapter creates a story of their journey to Alpha,” he says. “If you go to our house, there is a room that has six-foot-tall wooden panels that have been cut and designed specifically by the members of each ship.”

The Alpha house is currently located at 1606 N. Rolla St. The first Alpha Phi Alpha house in Rolla was a renovated Cadillac dealership, according to George, who says many of the owners of rental properties in town discriminated against African Americans and international students in the 1960s. After a formal complaint by an Alpha member, the university eventually adopted a policy that required the owners to sign a nondiscrimination affidavit in order to have their properties advertised as campus housing. Furthermore, George says, members of Alpha Phi Alpha were instrumental in starting the Association for Black Students and the university’s student chapter of the National Society of Black Engineers.

Students at Missouri S&T must complete one semester with a grade-point average of 2.5 or higher before starting the process of joining the Alpha Phi Alpha fraternity. While the Alphas don’t have the highest collective GPA on campus, George is very proud of the house’s graduation rates. “Since 1992,” he says, “only two members have not graduated.”

A motto coined by Alpha Andrew T. Cleveland, EMgt’06, was recently embraced by fellow members: “We party hard, we stay out late, but most of all, we graduate.”