Missouri S&T residence hall students and staff brought home six of 10 awards – more than any other school – from March’s annual business meeting of the Midwest Affiliate of College and University Residence Halls (MACURH). 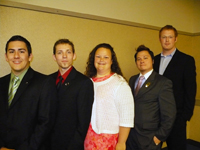 Missouri S&T’s Shamrock Chapter of the National Residence Hall Honorary (NRHH), an organization composed of the top 1 percent of residence hall leaders, was recognized as the Chapter of the Year for leadership initiatives and programming on campus and in the MACURH region.

In addition, the following students and staff won MACURH awards:

Missouri S&T is one of 50 schools in MACURH’s seven-state region.