Getting in the game 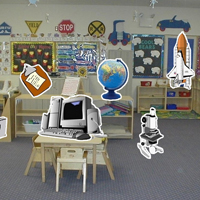 The key is to target them while they are young, says Daniel Tauritz, assistant professor of computer science. “We want to reach them before their minds are made up, and make sure they enroll in the elective math and science courses in middle school and high school that will prepare them for a career in computer science.”

With the percentage of female students entering computer science on the decline nationally since the 1970s, it’s especially important to present computing’s impact on society. According to Tauritz, research has shown that women favor socially relevant vocations, such as medical careers, where they have a direct impact on people and society. CSRecruit21’s software shows in a variety of ways how careers in computer science help people by providing real examples of ways Missouri S&T computer science graduates impact society.

Glaese, Guntly and Williams are fine-tuning the software and adding new games. The software offers students a variety of activities to choose from, such as a memory game, a board game and a maze. All of the activities are interwoven with information and questions about computer science. The s­oftware is targeted at children in the third through sixth grades.

Another group of computer science undergraduates will take over the project this fall, Tauritz says. Eventually, a version of the software will be available for download online.