On the afternoon of Saturday, Oct. 28, 1972, 12 young women gathered at Christ Episcopal Church in Rolla, Mo., dressed in white. The occasion was one of ceremony and celebration, marking the beginning of a new opportunity for the female student body at the male-dominated Missouri S&T campus.

The event, now a part of campus history, was the initiation ceremony for the new members of the Epsilon Alpha Chapter of Kappa Delta, the first National Panhellenic Sorority installed at Missouri S&T.

“I remember that ceremony well,” says original Kappa Delta member Laura (Eddleman) Davenport, Psyc’72. “We just felt a lot of pride; we felt we had done something really great. We had arrived; we had met our goal.” 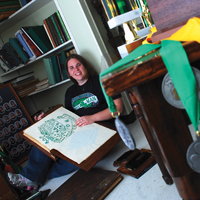 Missouri S&T’s Kappa Deltas originated in 1969 as the local sorority Lambda Sigma, known as the little sisters of Sigma Pi fraternity. In April 1972, a letter from the national vice president of Kappa Delta informed them their petition for membership had been accepted.

Within a week, pledging ceremonies were held and the new Kappa Deltas began learning the rules and rituals of the sorority from members of the Alpha Psi Chapter at Drury University, as well as representatives from Kappa Delta’s national organization.

“It was a complete whirlwind. I joined the local sorority and the next thing I knew, it was going national,” remembers Lynda (Nations) Short, Engl’74. “During the summer, they trained us and we learned all of the ceremonies. It was just like a regular rush, but it was only for the girls who were members of Lambda Sigma.”

Soon after, Zeta Tau Alpha “women’s fraternity” (the phrase used for such organizations founded before 1874) became Missouri S&T’s second National Panhellenic sorority in May 1973. Chi Omega women’s fraternity would follow in February 1978. Finally, Phi Sigma Rho sorority was installed on campus in April 2004, although it is not affiliated with the 26-member National Panhellenic Council.

Back during Missouri S&T’s first formal rush in the fall of 1972, there were 411 women attending the university.

“At that time, Missouri S&T was barely on the map as far as women were concerned,” says Davenport. “Kappa Delta was about doing something for the girls. We could tell the female population was going to grow, so it was a way to organize the women and have something that was just for them. It gave the university some kudos to be able to tell women there was a sorority on campus.”

There are now 1,286 women enrolled at Missouri S&T, with 22 percent belonging to one of the four Greek organizations, and Kappa Delta has grown from its 12 original members to 50 active members and 600 alumnae. As the number of women on campus has grown, so have their opportunities in the fields of math, science, engineering and technology.

“There are definitely a lot more opportunities for women,” says current Kappa Delta President Katherine Stockstill, a junior majoring in biology. “But, it still takes a lot of hard work. Since these are male-dominated fields, there still is a certain level of competition.”

Stockstill says being a Kappa Delta has helped her do away with her shyness, and has given her a support system of sisters during her years at Missouri S&T.

“They are your family, they are there with you when something goes wrong and you need a shoulder to cry on, or when you’ve had a good day and need someone to help you celebrate,” says Stockstill.

Vice President of Membership Stacie Adams, a junior majoring in psychology, says being a Kappa Delta has helped her build confidence, overcome her fear of public speaking, and get involved in life on campus.
“I’ve never felt like I’m in the minority as a woman at Missouri S&T because I have been a part of the Kappa Delta house for so long,” Adams says.