Dale and Patricia Ruma Spence: You don’t have to retire with a million dollars to make a difference

Going Greek has made a big difference in the lives of two young alumni who are giving back to Missouri S&T and encouraging other recent grads to do the same.

Dale, ME’97, MS EMgt’05, and Patricia Ruma Spence, EMgt’94, MS IST’05, endowed a need-based scholarship that distributes $1,500 annually to one member of Pi Kappa Alpha fraternity and created the Kappa Delta Sorority Annual Scholarship Fund, which awards $3,000 annually to women on the sorority’s executive council. Patricia hopes the fund will be expanded or endowed as other Kappa Delta alumnae learn of its existence. Dale and Patricia also have given their time to a number of alumni organizations, while remaining active in advisory roles with their respective Greek organizations, Pi Kappa Alpha and Kappa Delta. 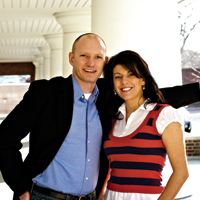 And the Spences are doing it all before the age of 40.

“The common view is that you must be retired with a million dollars to make a difference, and that’s just not the case,” Patricia says. “We are everyday people in our thirties who feel our Missouri S&T education and Greek organizations contributed significantly to our successes and ability to pursue our dreams. That is why giving back to our alma mater is so important to us.”

Dale and Patricia are trying to inspire other young alumni to do the same. They point out there are many ways giving can be accomplished, and not all of them require shelling out big bucks. Dale suggests supporting student design teams or annually leveraging an employer’s matching gift program. “Everyone has a personal reason for giving,” Dale says. “Patricia and I believe in education, we believe in the mission of Missouri S&T, and we believe in assisting students in their goal of becoming tomorrow’s leaders.”