A No. 1 tool for early cancer detection

If Yinfa Ma’s res­earch holds up, pregnant women and those on probation won’t be the only ones asked to pee in a cup. Ma, Curators’ Teaching Professor of chemistry, has developed a non-invasive instrument for pre-cancer screening that uses urine samples to detect cancer in the body and predict the cancer’s type and severity using a group of biomarkers. 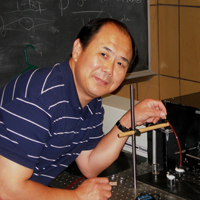 Yinfa Ma with a protoype of a non-invasive cancer screening tool.

Cancer is the second-highest cause of death among all diseases,” Ma says. “Early diagnosis of cancer is crucial, but not many people want to go to the hospital to undergo costly, invasive cancer screening.”

Ma’s research builds on existing knowledge of pteridines, compounds found within the body that serve as important cofactors to regulate the metabolism of cells. Ma found that six pteridine derivatives can be detected in urine samples, and that levels of some pteridines increase significantly if there is a tumor inside the body. Most importantly, Ma discovered that one molecule, called oncopterin, exists in the urine of cancer patients but not in healthy human subjects. Further testing for oncopterin, using different techniques, still is required.

Ma’s prototype instrument, appropriately called a P-scan, can be used to screen urine for oncopterine and the six other pteridine bio markers. The oncopterin level in urine can be used to determine whether cancer is going to develop, and varying levels of the six pteridines can actually provide a “fingerprint” of the type of cancer.

“I won’t give up,” Ma says. “I will continue to work on this project until we have succeeded and can market the instrument to save people’s lives.”