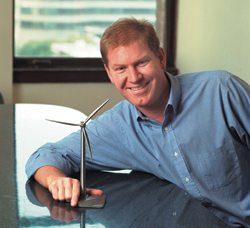 Michael Haas, AE’87, has always understood the importance of hard work and doing the best he can at whatever task he’s involved with. These days that task is chasing the wind.

Haas, who lives in Oakland, Calif., with his wife and three kids, is president and founder of Orion Energy, a wind energy company.

Founded in Oakland in 1998, Orion Energy employs 20 full-time staff members and has small regional offices in the Midwest and the East. Haas also leads a staff of 15 at Orion’s sister company in the United Kingdom, Renewable Development Co. Ltd.

“Before we begin, it’s a bare plot of ground and when we’re done, there is a utility-scale power plant generating electricity with no greenhouse gas or other harmful air or water emissions,” Haas says.

Orion has completed eight operating wind farms in the U.S. and RDC has completed three in the U.K. In total, they generate nearly 1,000 megawatts of renewable electricity to the power grid.

“These are all large utility-scale projects,” Haas explains, “as opposed to installing a single windmill in the backyard to power a home.” Orion’s projects average more than 100 megawatts with a building cost of more than $175 million apiece.

Haas feels that skyrocketing energy costs have helped the industry recognize the need to add more renewable energy to the mix.

“Utility companies around the country now understand the hedge value a wind energy facility provides, particularly given the recent high prices and volatility of fossil fuels,” Haas says. “Our fuel is free.”

Haas says his concern about the supply of fossil fuels and the production of greenhouse gases led him to found the company.

“We have a finite supply of fuels to use and their emissions aren’t good for the atmosphere,” Haas says. “There is a strong probability that we will affect things like global warming. If we squander our precious fossil fuel resources, that is an unacceptable legacy to leave our future generations.”

While he recognizes that it would be naive to expect renewable energy to completely replace fossil fuels, Haas believes that in a responsible energy mix, substitutions must be made.