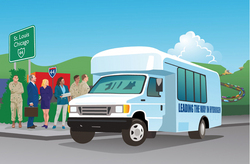 Soldiers at Fort Leonard Wood, Mo., may soon get the chance to reduce their use of fossil fuels and ease the strain on their wallets – just by sitting down.
The idea is simple. A public transit system would transport commuters along the Interstate 44 corridor, from Fort Leonard Wood to Rolla and Lebanon. If successful, hydrogen-powered shuttle buses would then retire the gasoline-powered fleets, creating the first rural test site for the federal government’s hydrogen technology program.

Since 1995, use of public transportation in the United States has grown sharply, and faster than the use of private vehicles, according to the American Public Transportation Association. In metropolitan areas like Washington, D.C., and Los Angeles, public transit services have flourished, reducing congestion and improving air quality without imposing government mandates or regulations.

In rural America, however, commuter transit systems are not always feasible. And in Missouri, before investments are made to build a hydrogen fueling station, officials needed to know whether enough people would get on board to sustain a commuter service.

“The members of our team chose to participate in this project because we wanted to work on something that we felt had the potential to have a lasting positive effect,” says Clayton Graham, BAdm’06.

The class found that a public transit system could have two main benefits, says Graham. Because many families stationed at the post have only one vehicle, spouses who would like to work are often unable to do so. A public transit system would give both spouses the option to work by eliminating dependence on a personal vehicle, potentially increasing the number of available workers and positively affecting the regional economy. In addition, public transit could help reduce emissions levels and prevent congestion on Interstate 44 as the region continues to grow.

In exchange for using the commuter service, the U.S. Army would provide soldiers and other federal employees with a $105 per month tax-free allowance, significantly reducing their out-of-pocket expense.

“This project has the potential to positively impact the region for generations to come,” Graham adds.

The study was funded by a $70,000 grant from MoDOT to the MRPC, which undertook a market analysis for the new service with Lance Gentry, assistant professor of business administration at UMR. The MRPC is now seeking proposals from organizations interested in running the commuter service.

Although hydrogen may have taken the back seat in the public eye to other alternative forms of energy, UMR researchers and their partners are betting the clean fuel will soon move forward in Missouri. The commuter bus service presents a unique opportunity for UMR and MTI to establish a rural hydrogen transportation test bed to develop, demonstrate, evaluate and promote hydrogen-based technologies in a real-world environment. The researchers believe Missouri is ideally suited to develop and demonstrate the proper operation of hydrogen highways in a rural setting, which represents more than 25 percent of the nation’s transportation needs and is not well-represented in the current major national projects.

“It’s the chicken-and-egg riddle,” says project leader K. Krishnamurthy, professor of mechanical engineering and associate dean of the UMR School of Engineering. “You need to have people embrace the new technology for that technology to be viable. So what do we do first? That’s where these demonstration projects help, in terms of educating the public and collecting the data to go back to the development of the technology. Once we have the information, once the public is ready to accept these new designs, then we’re going to see them on the road commercially.”

The project is being carried out under the guidance of the national University Transportation Center (UTC) at UMR, which was one of 10 in the nation to receive “national” status under the federal highway bill in 2005.

“After seven years of operation, this UTC has developed into a Center of Excellence on the theme of advanced materials and non-destructive testing technologies,” Krishnamurthy says. “The proposed work will build on these strengths and expand the center’s theme to include research, development, demonstration and deployment activities of alternative fuel – including hydrogen – vehicles and supporting infrastructure to address the growing need for a successful transition to a hydrogen economy.”

The hydrogen-powered buses that are currently in operation in California and Washington, D.C., run at low speeds with frequent starts and stops. For the Fort Leonard Wood commuter service, shuttles would need to run at 70 miles an hour to operate on Interstate 44, providing researchers with a niche to gather daily performance data that could help improve both vehicles and fueling stations. Researchers want to take a holistic approach to the project, studying everything from safety and public acceptance to the practicality and reliability of hydrogen as a fuel.

“We’ve had the luxury of more than 100 years of working with gasoline,” Ankner explains. “Gasoline is equally combustible – and in some cases more so – than the other fuels being talked about, but we’ve lived with the accidents and we’ve learned from them. It’s a comfort factor.”

In addition to educating the public and collecting the data, the team will work with first responders, community leaders and other public representatives to clear up any confusion they may have about the new technology.

“Communities are going to look to those people and ask them whether they should embrace this new technology,” Ankner says. “One of the key things we’ll be doing in this project – besides good science, which is necessary and critical – is to educate the public and hopefully develop some of the templates for the industry for how to do this.”