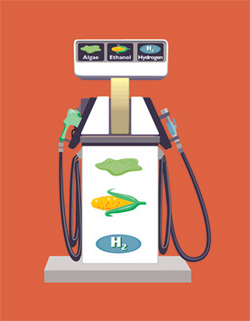 One of the greatest challenges facing the United States in the 21st century is how energy is produced and consumed. The country’s dependence on foreign oil is often cited as a security risk, the Achilles’ heel of our economy. The concern is understandable: America consumes a quarter of the globe’s daily production, producing high levels of carbon dioxide and other emissions that many believe are contributing to global warming.

U.S. companies and scientists have joined the worldwide rush to develop the next generation of alternative sources of fuel. Everything from the environment to consumers’ pocketbooks could be saved by diversifying the nation’s fuel supply.

Environmentally friendly biofuels like ethanol and biodiesel are expected to help farmers to find new markets for their products and provide communities with a renewable replacement to foreign crude oil. Hydrogen, when used in fuel cells, is praised for its ability to power a car that requires no gas and emits pure water instead of exhaust fumes.

But the promise of alternative fuels for transportation and other uses comes with a practical, worldwide problem: where to get new, sustainable sources of energy. As the stories that follow demonstrate, UMR researchers are looking everywhere from cornfields to caverns for a way to power the nation’s future.