The glass that binds 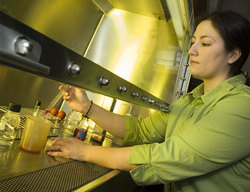 As materials for orthopedic implants, titanium-based alloys have given millions of people the opportunity to live fuller lives. But patients’ lives could be even better if the materials used to bond the implants to bone could be strengthened. Stronger bonds could mean fewer problems with the implants later in life. Trini King, BioSci’05, a naval medic for six years prior to attending UMR, has been testing materials in hopes of finding a method to improve the longevity of implants.

Working with Roger Brown, a professor of biological sciences, King spent the past semester researching the bone-bonding ability of two borate-based glasses developed at UMR and compared it to a silicate-based material currently used for titanium alloy implants. These borate-based compounds, B18P and H12, were developed for their ability to bond with titanium at the atomic level, says King. By contrast, the silicate-based glass currently used in implant procedures loses its strength, and over a period of 30 to 40 years can weaken to a point that an implant may loosen and shift.
King’s OURE project involved taking powdered forms of the glasses and soaking them in simulated body fluid for two weeks. Using infrared analysis, she then checked to see if hydroxyapatite (HAp) had formed on the glass. “Hydroxyapatite is a form of calcium phosphate and is the precursor to bone,” she explains.

The samples did form hydroxyapatite. “This is good and we know this forms bone cell characteristics,” King says.

Next, King inoculated an established line of mouse cells into a culture dish with the glass to test the bone cell growth rate and their ability to adhere to the glass. The UMR-developed borate glasses adhered firmly and had sufficient growth, but at a rate less than the silicate glass. Finally, to test whether the cells would mineralize into bone by forming the enzyme alkaline phosphatase, King put the glass samples in SaOS, a strain of cancer cells known for its ability to readily form alkaline phosphatase, and a red salt dye that would detect the bone phenotype. When King removed the samples after six days, the bone cells, dyed bright red, completely covered the glass surface.

After repeated experiments, the two borate-based glasses were shown to adhere firmly to bone cells and allow for growth, but at a slightly slower rate than the silicate-based control. King is working to publish her findings and eventually hopes to pursue a career in pathology.

By Benjamin Roodman, a senior computer engineering major and former features editor for the Missouri Miner.