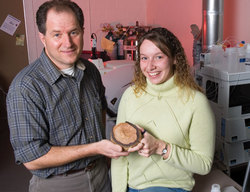 UMR senior Katherine Downs has a thing for blueberries, but not the kind that grow on plants. Downs’ blueberries are of a more celestial makeup.

Called “martian blueberries,” these marble-sized rocks, found on Mars, are actually “concretions,” or formations of the iron oxide mineral hematite. They are called martian blueberries because they give the soil and rocks of the red planet a blueberry muffin-like appearance, and they could have huge implications about the existence of water – and possibly even life – on Mars.

David Wronkiewicz, associate professor of geology and geophysics and Downs’ OURE advisor, says there is a lot of excitement among the scientific community about these martian rocks because similar types of formations on Earth have typically signified the existence of water and even biologic activity. The blueberries’ presence on Mars, therefore, could point to proof that water, or perhaps life itself, has existed there.

According to Downs and Wronkiewicz, there are similar occurrences here on Earth: in the Navajo Sandstone in Zion National Park and the Iron Springs Formation sandstones of Parowan Gap in Utah. These terrestrial versions are generally referred to as Moque Marbles.

Downs, who will graduate in May with a degree in geology, is from Kewanee, Ill. She became interested in geology after attending the Jackling Institute, a UMR program geared toward upper-level high school students planning to go into engineering. “I was kind of a girly-girl, so geology wasn’t the obvious choice from the start,” she says. “My parents were kind of shocked and didn’t know what to expect, but they were supportive.” Downs plans to continue her research of martian blueberries into graduate school at UMR, and would eventually like to start an environmental geology consulting firm.

Downs and Wronkiewicz are trying to understand how the martian blueberries are formed, and eventually hope to simulate the process in laboratory experiments. They are using Dakota sandstone samples from Utah as nucleation seeds for the formation, which is similar to rust forming on a piece of iron.

“Right now we’re trying to figure out why just a halo of rock is forming around the seed sandstone,” says Downs. “Then we can begin to create something closer to the real martian blueberries.”

Other implications involve the studying of mineral migration in the geologic past of Mars, as well as Earth. This may help track petroleum migration into and out of potential reservoirs, Downs says.

Although the project won’t make an immediate impact on industry, Downs thinks it could be“pretty huge” in scientific circles. After the research is published, she says, “I might be a superstar – for a day or so.” She also can’t wait to study those blueberries in person. “I would love to be the first geologist on Mars!”

By Chuck Williams, a senior physics major. He was also one of the Perfect 10 Improv Group featured in last spring’s magazine.