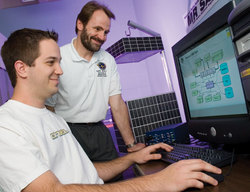 If NASA selects a miniature satellite designed by UMR students for a launch in 2007, Adam Grelck’s research project will really take off. That’s because Grelck is researching various options for the onboard computer of the Missouri-Rolla Satellite (MR SAT), a miniature orbiter designed by a team of students as part of NASA’s Nanosat IV competition.

Grelck, a senior in computer engineering and computer science from St. Louis, is a member of the onboard computer subsystem for the MR SAT team. “My part of the research is responsible for making sure that the missions can be completed,” he says. Specifically, he’s responsible for interpreting the requirements for the subsystem and determining how to fulfill those requirements.

The MR SAT project was recently accepted into Nanosat IV, a student competition sponsored by the Air Force, NASA and the American Institute of Aeronautics and Astronautics. To be eligible for a shot at going into orbit, the UMR team must build its spacecraft by January 2007. “The winning spacecraft will then be provided a launch into Earth orbit,” says team advisor Hank Pernicka, associate professor of aerospace engineering. Pernicka is also overseeing Grelck’s OURE project on the computer subsystem.

According to Grelck and Pernicka, the project is designed to test new technologies that may be used in future distributed space systems (DSS) missions. DSS missions would involve spacecraft flying in tightly controlled formations. Such formations may be controlled using “free flying” formation control schemes, or alternatively by using tethers to keep the satellites from straying too far apart. The UMR project uses two small satellites connected by a short tether. Once the spacecraft are in orbit, the tether would be extended to allow the two satellites to collect data while flying in formation. After a certain time, the tether would be disconnected, and the pair of satellites would be controlled by Grelck’s onboard computer system.

“One requirement of the computer is that it will control power delivery to each subsystem – which is going to require a fair amount of research and experimentation to get working properly,” says Grelck. “Computer hardware and software become very complex as systems get bigger, so I have to make sure that they will still work flawlessly or the whole project could fail.”

Grelck, who loves cars and flying, learned about the competition from a friend and thought it would be a good way to learn about satellite design. “Of course,” he adds, “it also looks good on a resume.”
His favorite aspect of the project is designing all of the computer hardware and software. “It is hard to design survivable hardware and software,” says Grelck.

But the design isn’t as bad as documenting the effort. “I don’t enjoy all of the associated paperwork required,” Grelck says, adding that it’s “a necessary evil, I suppose.”