Journey to the core of the reactor 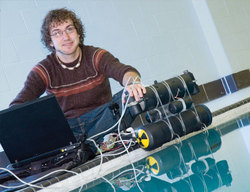 As the nation’s nuclear reactors approach middle age, they’re starting to show their age, and that means maintenance is becoming more of a chore. But monitoring the infrastructure near the core of a reactor can become quite dangerous due to the high levels of radiation there. This is where Dave Brown’s research comes in.

Brown, a senior in computer science and electrical engineering from Lake of the Ozarks, Mo., worked on a research project with two other students, Mike Hibbeler and Igor Izyumin, to develop the hull for a miniature submarine that could be used to plumb the depths of a nuclear power plant’s cooling pool. When completed, the submarine, remotely controlled and equipped with a “radioactive-hardened” video camera, should be able to take images at the core of the reactor, which would allow nuclear engineers to inspect the images from a safe place.

The sub is about the size of an old-school computer monitor – small enough to easily maneuver around the core of the UMR Reactor, Brown says. The hull is attached to the surface by an air hose and network cables for the electronics. The sub also contains an on-board air bladder to help control depth. Brown has developed the system in such a fashion that air pressure can be pumped or released into the bladder on the surface by a regulated air-pressure system. The sub also has a separate pressurized compartment for the video camera, he adds.

Brown is now working to finish the sub and get it ready for testing at the UMR Reactor. “The dangers of radiation have to be taken very seriously with the highest precautions,” he says. He sees this research project as “very practical” and hopes it will be used elsewhere too.

Even though the submersible has yet to hit the water, Brown is already visualizing the next generation of submersible. He hopes that a future version will not only capture video images of the reactor core, “but perhaps bring radioactive power rods to the surface to be analyzed by a robotic arm.”