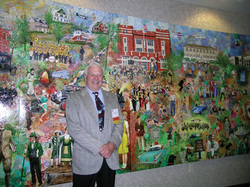 Two sculptures on the UMR campus that celebrate the passage of time – Stonehenge and the Millennium Arch – were recently joined by MSM-UMR 20th Century, a new mural by Jack Guth, CE’50, that portrays scenes from campus history.

Unveiled at the Havener Center during this fall’s Homecoming, the 15-foot-long mural consists of five panels, each 6 feet high by 3 feet wide, that depict UMR campus life from the end of the 19th century to the beginning of the 21st. Each panel represents approximately two decades in time with activities and events overlapping.

“The mural is a composite visual history of the wonderful architectural designs of the representative buildings and campus landscaping; and the student activities, both social and academic,” Guth explains. “It attempts to portray the basic constant of the student spirit, the nostalgic image of MSM-UMR.”

The panels’ backgrounds incorporate UMR’s oldest structure, the Rolla Building, as well as Jackling Gymnasium, Parker Hall, the Chancellor’s Residence, the Havener Center, and a variety of other Rolla locations that students, faculty and alumni could nostalgically relate to, such as the railroad station and Scott Drug Store.

“The buildings overlooking each panel represented on and around the campus are memorable structures where students and faculty have spent most of their unforgettable time,” Guth adds.
This isn’t the first time Guth’s art has found a home on campus. Some of his earlier works can be seen in the alumni association offices and his fraternity, Sigma Nu.

UMR’s Curtis Laws Wilson Library at UMR holds more than books and journals. Einstein, a bronze bust cast by Rolla native Louis Smart, and St. Patrick, the patron saint of engineering (as conferred by UMR students), welcome students as they enter through the library’s doors. Once inside, visitors can examine Rockwell Kent’s Might … To Move Mountains, a masterwork that recalls UMR’s mining roots, and Astrolabe, an aluminum and epoxy sculpture by Thomas Schulte that is based on an ancient astronomical instrument and navigational tool.

The library isn’t the only place visitors can experience UMR’s unique visual arts. The Southwestern Bell Cultural Center on campus holds a permanent collection, including prints by Diego Rivera and R.C. Corman, as well as a gallery for temporary exhibits. Castleman Hall features Pipe Dudes, a mural by Leo Soisson; Cosmic Dance, a bronze sculpture by Louis Smart; and numerous lithographs by Edwina Sandys (granddaughter of Winston Churchill), the artist commissioned to create the Millennium Arch. Even Parker Hall features a bronze sculpture of the building’s namesake and a mural of MSM-UMR chancellors, painted by John Koenig