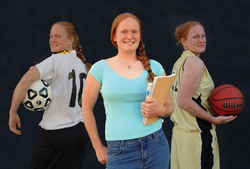 No team is made of one person alone, but junior Maggie Thompson, a pre-medical student from Marshall, Mo., does her fair share of helping UMR athletic teams.

You can’t accuse Thompson of slacking on hard work. A 4.0 student involved with a flurry of on-campus activities, ranging from the Fellowship of Christian Athletes to a pre-professional group called SCRUBS, Thompson is one of the few students on the UMR campus who tackle two different varsity sports each year. The basketball and soccer player hopes to motivate future students who aren’t sure if they can balance varsity athletics and academics.

“I want to push people,” Thompson says. “I hope I’m an example to freshmen, to let them know it’s possible to achieve success both on campus and on the field.”

Thompson’s leadership was recognized when she was chosen to attend the 2005 NCAA Leadership Conference held last summer at Walt Disney World’s Wide World of Sports Complex in Lake Buena Vista, Fla. “We talked about leadership, self perception, stereotyping, all sorts of things,” Thompson says. “There were more than 300 student athletes from all over the United States, and even some from other countries. There were several sports represented, from basketball and baseball to synchronized swimming and horseback riding.”

Thompson says it was exciting to spend time with so many college athletes. “It was great having a common bond among such a large group of people,” she says. “We were all so different, but we had a lot in common, too. I even met another person who balances basketball and soccer — and she was from Hawaii.”

A midfield starter for the past two years in soccer, Thompson says there’s only one time of the year when soccer and basketball have to compete for her time. “Soccer carries a couple of weeks into our pre-season basketball workouts,” says Thompson. “Soccer takes precedence at that time. Then by the time basketball season ends, spring soccer has already begun.”

With a new coach for women’s soccer, and a new conference for UMR, Thompson hopes both teams will achieve great things this year. “I’m hoping we can jump in and make a name for ourselves,” Thompson says.
“We’ll show our new competitors that we’re here to play.”

Competition is a driving force for Thompson, although her friendships with teammates are equally important. “All of my teammates offer the drive to be better and to compete hard against other teams,” Thompson says. “We all have opportunities to compete in sports and excel in classes, and we don’t want these opportunities to go to waste. If I can play ball and receive a quality education at the same time, then I should go for it. And that’s what I’m doing.”

Please join us as we honor the university’s past, celebrate its present and envision its future, fr[...]

Leading into the future

Missouri S&T students leave the university with more than a degree. They gain invaluable experi[...]

Missouri S&T’s rank among Missouri colleges for alumni salary potential, according to Pays[...]