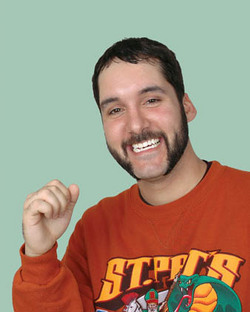 The minimum requirement for portraying St. Pat is the ability to grow a beard. But Jeremiah King, UMR’s 2004 St. Pat, has a lot more than facial hair going for him.

“St. Pat needs to be able to talk to business owners, campus officials, students and everyone else,” says King, a senior in civil engineering from St. Charles, Mo. “He also has to lead his court and make sure that the celebration is the best ever.”

King’s leadership qualities served him well as St. Pat and also helped him earn other distinctions. In May, shortly after getting elected president of the student body, King was awarded a $10,000 stipend by then-Chancellor Gary Thomas for “best personifying the strengths of a UMR student.”

The stipend is funded by a donation from an anonymous UMR graduate who wanted the money to go to a student like King. So what does King, who says he’s honored and humbled by the award, think the unique strengths of UMR students are?

“UMR students are known for being smart,” King says. “If they weren’t, they wouldn’t be in school here. Another thing that I have noticed is a large number of leaders. Because of a willingness to get involved, they learn good social skills.”

King started developing social skills and leadership qualities before he came to UMR. “I’ve been heavily involved in Boy Scouts in the St. Louis area,” he says. “The Boy Scouts are a great organization. I’m not saying I never got in trouble, but they instill in you a way to live, act and treat other people.”

King isn’t sure what he’s going to do after he graduates, but he’s leaning toward getting a job and pursuing a master’s degree in business at night, or going to law school. Regardless, he’s a good bet to succeed.

Looking back, King’s definitely had a lot of success at UMR. But the highlight of his college career so far, he says, was the 2004 coronation ceremony during the St. Pat’s celebration.

“The trumpeter and herald went down first, and the herald started talking and asking everyone to welcome St. Pat,” King recalls. “The feeling you get when you walk through that door and down the steps is amazing. Master guards and guards stomping. People on their feet, cheering you as loud as they can. It is truly a wonderful feeling.

“It’s quite overwhelming. You’re thinking, ‘They’re cheering for me?’ I will never forget it.”