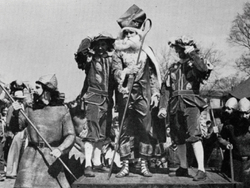 In 1950, the year the Missouri School of the Mines opened its first dormitory, the New York Yankees could afford the best baseball players in the world, tensions were high overseas and Americans were embracing new technologies at home. In Rolla, the annual St. Pat’s celebration was, no doubt, the best ever.

At UMR, then MSM, Kelly Hall became the first dormitory on campus. The total enrollment at MSM in 1950 was 1,950. Tuition was free for Missouri residents, and gas must have seemed
cheap. Here are some average prices in the United States from 1950:

Those numbers have grown a lot over the years. In 2005, the first students moved into UMR’s new Residential College. The total enrollment this fall was about 5,600 students. The average starting salary for a recent class of UMR graduates was more than $49,000. The 2005 UMR Solar House Team built its house for about $110,000. UMR’s 2005 solar car, Solar Miner V, cost almost $200,000 to build — but it didn’t use any gasoline. Gas, of course, has climbed over $2 per gallon. And to take the family out for pizza and a movie these days costs roughly what a month’s rent cost in 1950.

At least those who don’t like change can take comfort in the fact that the 2005 St. Pat’s celebration was still the best ever.